Cavani does not want to extend stay at Man United, says father

London – Edinson Cavani’s father said on Tuesday the Manchester United striker was uncomfortable in England and wanted to return to South America, adding that his son’s wishes had been influenced by a three-match ban he received for using a racial term.

United manager Ole Gunnar Solskjaer confirmed last month that the club were planning to hold talks with Cavani, 34, about extending his stay after an impressive first year in England. The Uruguayan has seven goals in all competitions this season.

Cavani’s father Luis, however, does not believe his son will prolong his time in Manchester, and said that the striker had held talks with Boca Juniors president Juan Roman Riquelme about signing for the Argentine club at the end of the season.

“He has been thinking for more than two years that he wants to be closer to the family and that’s why I think Edi is going to end up playing in a team from here in South America.

“Edinson has had many conversations with Riquelme and would like to play for Boca. I would like him to play for a team that has chances of winning something and I think the return is going to be happen at the end of the season.”

Cavani signed for United in the close season on a free transfer, penning a year-long deal with both parties having the option to extend for a further 12 months.

He made headlines in January after accepting a three-game ban handed to him by the FA for using the word ‘negrito’ in an Instagram post after United’s win at Southampton on Nov. 29, before taking it down and apologising.

Cavani said it was an expression of affection to a friend and the FA acknowledged he was not deliberately racist and had not known the language used was offensive. However, it said it was not sufficient that he “simply had no such intent.”

The FA argued that “a follower of English Premier League football” would have deemed the word as racially offensive.

His father said the whole incident had left a bad taste.

“They banned him for three matches for this nonsense,” Luis added. “Here we always use that word ‘negrito’. We are not racists. Part of that weighs in the decision (to return to South America).”

Asked by Reuters to comment on the striker’s future, United said they will discuss with the player when the time is right whether to activate the option in his contract of another year at the club and will work out what is best for both parties. — Reuters 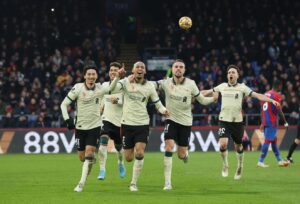 Liverpool edge closer to City, Chelsea back to winning ways